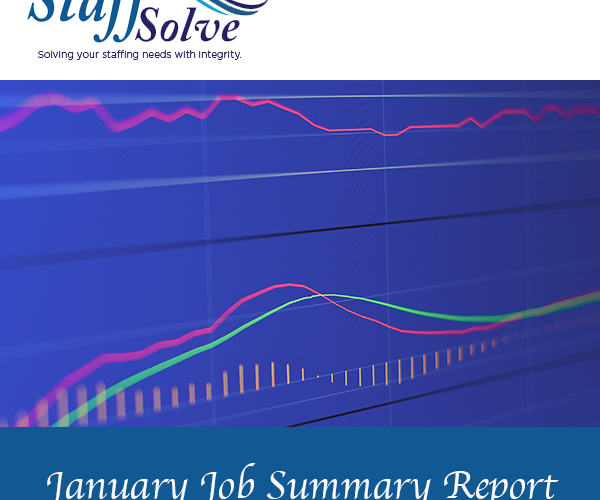 January is the start of a new year and new beginnings for both job seekers and employers. Staff Solve strives to assist employers and job seekers with information and process hiring, but the overall economic picture of employment trends in the United States and possible factors involved.

After accounting for the annual adjustments to the population controls, the labor force participation rate held at 62.2% in January, and the employment-population ratio was little changed at 59.7%. The number of persons employed part-time for economic reasons, at 3.7 million, continued to trend down over the month. These individuals, who would have preferred full-time employment, were working part-time because their hours had been reduced or they were unable to find full-time jobs. The number of persons not in the labor force who currently want a job was little changed at 5.7 million in January. These individuals were not counted as unemployed because they were not actively looking for work during the 4 weeks preceding the survey or were unavailable to take a job.

Among those not in the labor force who wanted a job, the number of persons marginally attached to the labor force, at 1.5 million, changed little in January. These individuals wanted and were available for work and had looked for a job sometime in the prior 12 months but had not looked for work in the 4 weeks preceding the survey. The number of discouraged workers, a subset of the marginally attached who believed that no jobs were available for them, was also little changed over the month, at 408,000.

Total nonfarm payroll employment increased by 467,000 for the month of January, with employment growth continued in leisure and hospitality, in professional and business services, in retail trade, and in transportation and warehousing. Employment in leisure and hospitality increased by 151,000 in January, reflecting job gains in food services and drinking places (+108,000) and in the accommodation industry (+23,000). Professional and business services added 86,000 jobs, with gains occurring in management and technical consulting services (+16,000), computer systems design and related services (+15,000), architectural and engineering services (+8,000), and other professional and technical services (+7,000). Temporary help services continued to trend up (+26,000) as well as retail trade (+61,000). Job growth occurred in general merchandise stores (+29,000); health and personal care stores (+11,000); sporting goods, hobby, book, and music stores (+7,000); and building material and garden supply stores (+6,000).

Revisions to previous employment reports were also made due to additional data received from individuals and businesses, specifically with the seasonal periods that can create an influx in growth or depression of opportunities available. See the table below for all revisions made.

Staff Solve continues to provide high-quality candidates and jobs in diverse markets for over 27 years. Let us take the stress off you so you can focus on your business by finding the perfect applicant for the position. If you are looking for employment, please visit our job seeker page and check out our job board for current positions. If you would like more information about the services we offer employers, visit our employer page or contact us today.

Resumes that Stand Out and Ace the Parsing Process

Keeping the Door Open with a Previous Employee or Employer